We all hate a thief, right? This page will help get the word out, so one of our own doesn’t make a purchase they will regret, and another of our own gets their rightful property back! Drop me a line if you have info, and I will pass it along.

“I have visited the SC area every year to ride in the Sandblast Rally which is all around Chester and Cheraw as I’m sure you know. My new 2014 450xcw with lots of rally mods was stolen from the hotel parking lot in Cheraw the night before the race in mid-March 2015, and I still have not recovered it (and unfortunately there was no theft insurance…). I have posted it on Facebook a few times but it hasn’t popped up, and nobody has tried to register it apparently, as the VIN would otherwise show as stolen.

I’ve attached a couple of pics in case you recognize it around. It had an Ontario plate (0C5R0) but I would imagine that would have been removed. Obviously I would be over-the-moon if it was found, and happy to pass on a reward to the finder as well. There is a large sticker with “SSS” on the front forks (suspension rebuilder). Scotts steering damper, Rekluse clutch, Akra pipe, custom suede seat with a Dakar logo on the top. It’s a VERY identifiable bike, unless it’s been all parted out.
The first pic is in my shop before I left Canada, and it had gold rims, but it was stolen with a set of black Warp 9 rims with orange hubs (see second picture, which was in Cheraw the day it was stolen).
Dan Curran
Napanee, ON” 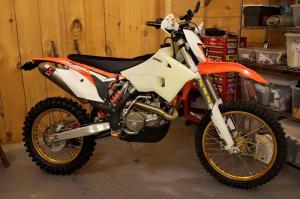